My dissertation is a continuation of my career-long fascination with patterns of diversity and temporal changes in forest ecosystems. Part of my work is using a long-term overstory dataset (1979-2010) from Lilley Cornett Woods to think about how topography might be mediating temporal oak-maple dynamics. I have also been analyzing patterns of phylogenetic and functional diversity in order to better understand the role of environmental variation in community assembly. I am also examining the relationship between diversity and stability using data from a subtropical broadleaved forest in Taiwan.

A lovely view of some trees in Big Everidge Hollow, part of the Lilley Cornett Woods Appalachian Research Station in Letcher County, Kentucky.

My Master’s thesis research at the University of Dayton in Dayton, OH examined spatiotemporal dynamics of tree regeneration and the herbaceous layer in an old-growth forest within the Lilley Cornett Woods Appalachian Research Station in Letcher County, KY. I resampled the woody understory (ground- and shrub-layer) and herbaceous layer in 320 subplots across a 52-ha watershed with varied topography. Regeneration patterns at the site follow the regional trend of eastern U.S. forests where species dominance is shifting from oaks (Quercus spp.) to more mesophytic species such as maple (Acer spp.). The herbaceous layer at the site is highly diverse, and I was able to add an additional 23 taxa to the flora of the site, bringing the site total to 286. The spatial patterns of alpha and seasonal beta diversity within the herb layer do not match: alpha diversity tends to be highest on the south-facing slope, while temporal changes in composition tend to be greatest on the north-facing slope.

As an undergraduate at Ohio University in Athens, OH, I was interested in effective manual removal methods for garlic mustard (Alliaria petiolata). After spending several years volunteering every spring to pull garlic mustard in natural areas around Athens, Dr. Philip Cantino and I were curious whether the timing of removal (early flowering, late flowering, or fruiting) and disposal method (hung on tree branches, spread on the ground, or piled on the ground) had an influence on the number of seeds pulled plants could produce. We found that pulling plants early, before they begin developing fruits, was the best way to reduce seed set, and that disposal method did not really matter.

This 6 hectare forest fragment located near Ansonia in Darke County, Ohio, was first brought to my attention in 2011 when another Master’s student in the lab at the time, Sean Goins, was studying seedling, sapling, and overstory dynamics there. I was urged by my advisor, Dr. Ryan McEwan, and another professor in our department, Dr. Albert Burky, to go see the site because of the fantastic herbaceous layer. So I went and immediately knew that I wanted to start an herb layer project there. Drew Woods is surrounded by farm fields on three sides and a road on the fourth, but it is undrained and there are several vernal ponds on the property. Beginning in 2012, I have been conducting annual herb layer samplings with undergraduate students every May and have collected some data on soil moisture, canopy cover, and soil temperature as well. To date, I have identified about 180 vascular plant species at the site, including 13 sedge species (Carex), and found that herb layer diversity is patterned along a north-south gradient at the site, with more diverse communities near the southern edge of Drew Woods. This appears to be driven by differences in canopy cover (lower LAI nearer the southern edge), which seems linked to soil temperature as well (higher soil temperature near southern edge, likely driven by greater insolation).

A field of trout lily (Erythronium sp.) in the northwest corner of Drew Woods.

This project came about as a bit of an afterthought on an NSF grant (Award DEB 1352995) Dr. McEwan won to study how the invasive shrub Lonicera maackii impacts headwater stream ecosystems. With plots already set up to sample overstory, sapling, and seedling vegetation, the next logical step was to look at the herb layer! Working with Master’s student Erin Rowekamp and several undergraduate students, we sampled the herb layer at the 5 NSF project stream sites in April, June, and August of 2016. Preliminarily speaking, the patterns we see so far are similar to other studies of this type: heavy invasions of honeysuckle suppress the herb layer. 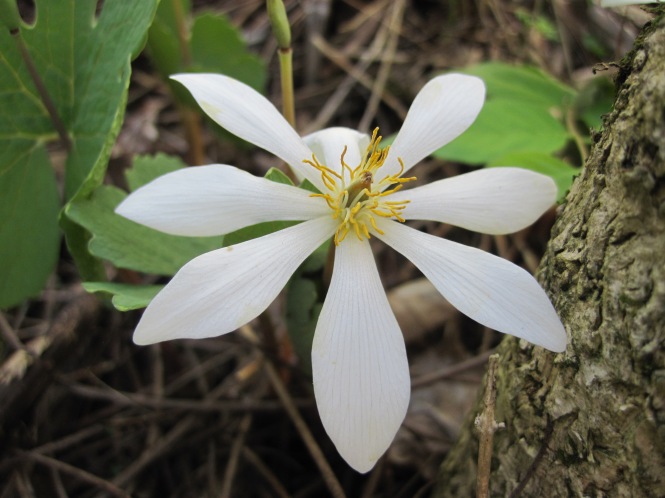 Bloodroot (Sanguinaria canadensis) in full bloom at Englewood MetroPark, where two of the project sites are located.

Undergraduate student Taylor Sparbanie is undertaking a floristic survey of Bill Yeck Park in Centerville, OH. We are attempting to identify all plant species across a range of habitat types: meadow, upland forest, riparian forest. We are also working to identify and map populations of invasive species throughout the park. 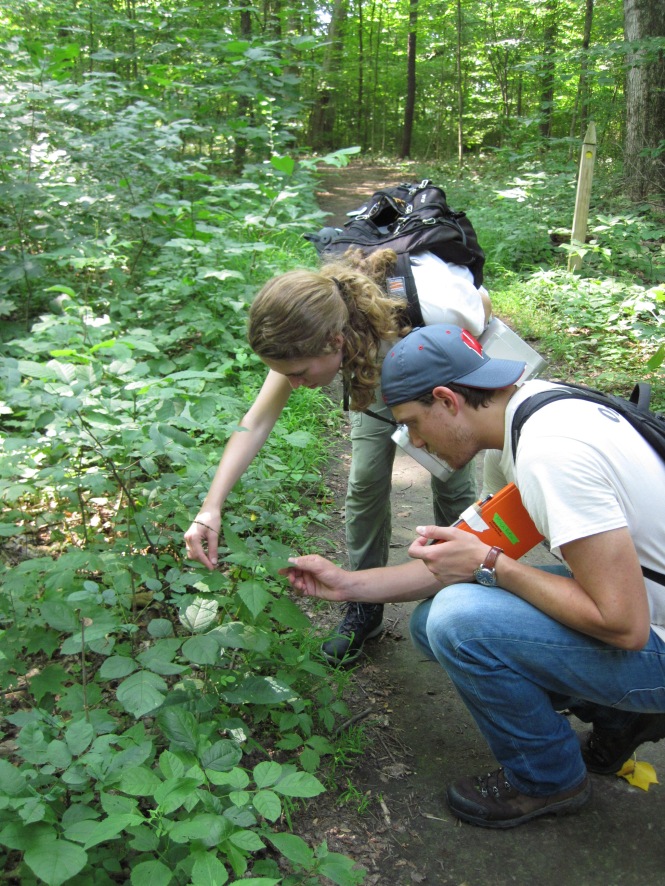